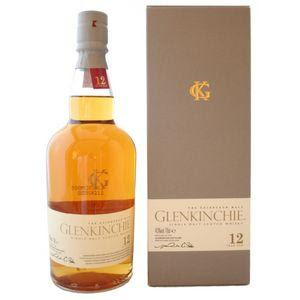 Lowland Single Malt Scotch Whisky
You are no doubt familiar with the words Speyside, Islay and Highlands, which of course refer to famous regions of Scotland that are home to many great distilleries.  But, Lowlands?  Maybe you have not heard of it and this is understandable.  The Lowlands is that region that generally borders on England. 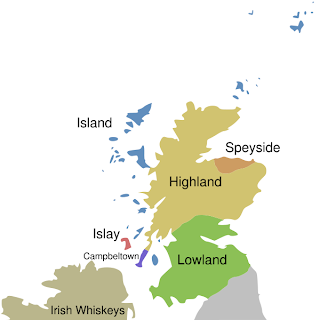 Anyway, enough of the boring little geography lesson.  What we are concerned with is whether or not such a region is home to a good distillery or two?  Well, actually it is home to three functioning distilleries:  Glenkinchie (near Edinburgh); Auchentoshan (near Clydeband) and Bladnoch (near Galloway).  We know from my previous review of Auchentoshan 12 year-old-single-malt that I am not a fan of that distillery.  The question for today is whether or not Glenkinchie is any good?  Well, students of scotch whisky, let's investigate!

Glenkinchie
I am not going to tell you how many hundreds of years ago this distillery was founded or the name of the brothers or family that started it all.  Why?  Because it seems that every scotch distillery has the same quaint, fairy tale, and I just refuse to parrot the stock marketing material embossed on the bottle labels and packaging.  I mean surely there was a greedy Scottish family out there, a couple hundred years ago, who were essentially bootleggers and tax dodgers, who made fine hootch and did it, not for the love of the spirit, but for the love of money!  Imagine that, a Scot who loved money?  What's wrong with that storyline?  I am waiting for that tale to be inscribed in fine poetry on the back of a scotch bottle.  I probably will have to wait a while for that one.

Before moving on to my tasting note, what I will tell you about Glenkinchie is an interesting observation made by the late, great scotch whisky chronicler, Michael Jackson, in his book Whiskey - The Definitive World Guide (DK Publishing Inc., 2005, NY).  At page 100, Mr. Jackson wrote that the greatest Lowland distillery was Rosebank.  It is owned by Diageo, a multinational drinks company, but closed in 1993.  How come?

In order to answer the above question, a brief explanation of the Classic Malts Selection is necessary.  In 1988, a drinks company going by the name of United Distillers and Vintners (who subsequently were bought out by Diageo) started marketing six single malt whiskies by region:

The problem with the "regions" of Scotland identified and marketed by United Distillers and Vintners and subsequently Diageo is that they are in some cases invented purely for the purposes of marketing.  No one else speaks of "West Highland" as a distinct scotch whisky region.  Moreover, such is the case for "Isle of Skye."  Why is this the case?  Simple.  Diageo wanted to showcase Oban and Dalwhinnie, referring to one as from Highland and the other from West Highland.  Isle of Skye is not normally regarded as a distinct scotch producing region.  It is merely home to one distillery, Talisker, which happens to be owned by Diageo.  All marketing.  The traditional regions of Scotland are: Highland, Lowland, Speyside, Campbeltown and Islay.  It is interesting to note that Campbeltown has a long history of being a scotch producing region, but is not represented in the Classic Malts line-up.  Could it be due to the fact that Diageo does not own any Campbeltown distilleries?  Me thinks so.

So, what does the above discussion have to do with Rosebank?  Back to Michael Jackson at page 100:

"When Diageo put together its six-strong Classic Malts range, it had to choose between Glenkinchie and Rosebank for the Lowland representative.  Most people in the firm would have chosen Rosebank, but in marketing, image is all; Rosebank sat next to a dissused canal and bridged a busy main road, while Glenkinchie lay in pretty farmland, with more tourist appeal.

Why, though, close Rosebank down?  Even if it was insufficiently pretty to be a frontline distillery, the quality of its spirit was such that it deserved to be in the portfolio.  Today the canal is open and industrial heritage is celebrated, Rosebank remains closed."

So, there you have it.  Glenkinchie was not generally regarded as producing the finest single malt whisky in the Lowlands.  That prize went to Rosebank, but it got shut down in favor of Glenkinchie because the latter had a prettier location, which lended it to the aims of marketing. 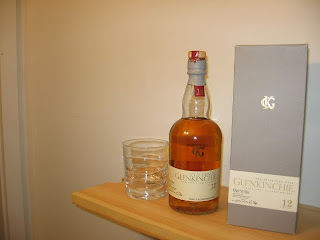 Finish (undiluted)
The lemon meringue quickly disappears and what remains in the mouth is raw onion and faint wasabi (ugh!). The onion and wasabi foreshadow raw alcohol/ginger root that dries across the palate.  Not good.

General Impressions
This single malt starts out ok on the palate, but takes a horrible turn (think Jan & Dean's Dead Man's Curve) for the worse on the finish when the onion and wasabi appears before melding into plain old alcohol.  This is totally unacceptable at the high price point charged for this single malt scotch.  I am very disappointed.

This single malt scotch was not cheap.  For the price, I expected a lot more.  I have no problem with it being light bodied.  What I have a problem with is that alcohol finish.  I mean rubbing alcohol.  Really makes it taste cheap on the finish.  No value for money here.  This is a single malt that confirms my opinion that blended scotch whisky can in some cases be better than single malts.

I am unsure as to whether or not the addition of water improves this single malt.

Bottom line:  Not recommended.  Very expensive for what you get.  A simple unfolding of flavors.  Where is the complexity?  For a high priced single malt scotch, there is not the level of complexity of flavors that should be there.

If I was a Roman Empreror and this malt was a gladiator staring up at me from the bowels of the Colosseum, awaiting word of his fate, he would be getting a big thumbs down from me.

P.S.  Is Glenkinchie Distiller's Edition any better?  Check out my review here.