This past Friday afternoon, I dropped by George’s office around 4:30pm. George, you will recall, is the fiftyish, personal injury lawyer, who has bottles upon bottles of unopened scotch given by clients as gifts. Since January, I have been endeavoring to drop by periodically on Fridays for impromptu scotch tastings. Just doing my part to make this place a better world.

“Brent will be dropping by,” George said.

I was ok with that. I had never met Brent, but he, like George, was another local personal injury lawyer, whose pulse quickened at the sound of an ambulance whine beyond the pane glass windows. 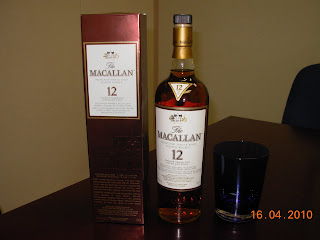 While we waited, not wanting to be idle, as that would be playing into the devil’s hands, George set a bottle of Macallan 12 years old and a previously opened Bowmore 10 years on the table.
I have never been a huge Macallan 12 years fan. Why? I just found the flavor profile to be just one flavor: sherry! It’s not poor quality, nor does it taste cheap, but rather one-dimensional and that dimension being: sherry! Nevertheless, none of these closely held opinions prevented me from having a dram while we waited for Brent. The nose was spicy vanilla. The palate was sherried in a high quality fashion. A little vanilla tucked in there I suppose but again not a lot else. George, on the other hand, enjoyed it immensely.
We heard the office door open from down the hall. George beckoned Brent to come on down much like Bob Barker. Brent appeared in the doorway with a litigation briefcase (one of those brief cases that looks like it could hold an accordion or something an encyclopedia salesman would be armed with). Clad in a navy blazer, button down shirt, rep tie, salt and pepper beard, studious glasses and a grin, he surveyed the boardroom table, the opened Macallan and the two tumblers. 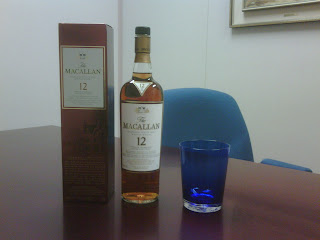 George has many great qualities, but unfortunately his sense of thrift can interfere with a proper scotch tasting. The office tumblers are dark tinted blue glass that he picked up at the “Dollar Store.” I think they are phony “Blue Mountain” glasses. The authentic one’s aren’t suitable for drinking scotch let alone their counterfeit cousins.

“If we are going to drink scotch I thought we would have proper drinking glasses,” Brent declared as he reached into the cavernous briefcase and produced three crystal tumblers. We had not been introduced and I already liked the guy. 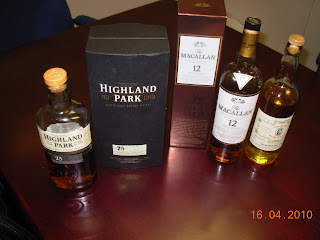 The next item he withdrew from the briefcase was a bottle of Highland Park 25 years, a bottle of water and a dark chocolate bar. Now, I knew for sure this guy was ok.

Brent poured some Highland Park 25 year old single malt, a scotch that I have only tried at Highland Park organized tastings. He insisted that we add a little water to open it up a bit.

I really, really, really liked this single malt. So much so that I knew I would buy be buying a bottle in spite of its high price. George and Brent were in agreement.

We also tried the Highland Park with some dark chocolate that was 90% cocoa. It worked oh so well!

Highland Park 25 has a high alcohol content of I believe 47%. Accordingly, I expected a bit of a bite or to be taken aback by its strength. Not the case here at all. If you visit the website for Highland Park they have a video tasting and the taster, makes reference to it initially overpowering the palate and that it is not for the novice drinker. I disagree. This is so beautifully smooth with many nuances and subtleties that even a newbie can appreciate it.

In fact, we were able to test it on a newbie, namely Mike, the custodian who happened by. He preferred it neat and was enthusiastic about it too.  A more recent tasting note for Highland Park 25 is available by clicking here.

Brent also had another bottle for us to try. A bottle of Tamdhu. It did not have an age statement on it. 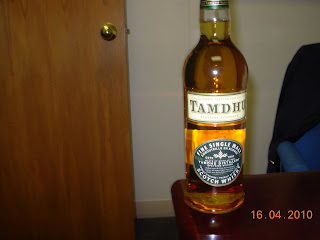 Finish (diluted)
Short, a little watery (but in a good, cleansing way).

Brent explained that he picked up several bottles of this Tamdhu because it was great value for money and therefore functioned as a good daily drinker. We agreed.  I would definitely buy the Tamdhu as a casual drinking dram.

I should also point out that the Macallan 12 years is by no means a poor single malt or flawed.  Brent and George really like it.  In the United States, it is enormously popular, but for me I would opt for something else.  Bottom line:  Everyone should try Macallan 12 years and judge for themselves.

In any event, that’s all for now.