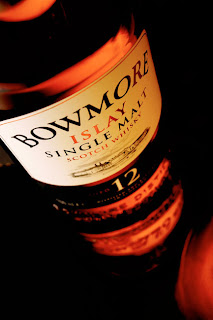 Novice scotch fans
What do they like? I should know because I used to be one. Usually, someone unfamiliar with scotch whisky or only having a casual acquaintance with it will gravitate toward the sweet, honey and cinnamon malts of the Speyside region. Easy drinking, smooth, kind of like a liquid candy bar. Hence, the popularity of blends like J&B, Bells, Ballantines and others.  Generally, the novice does not like peaty scotch and the peatiest come from Islay. 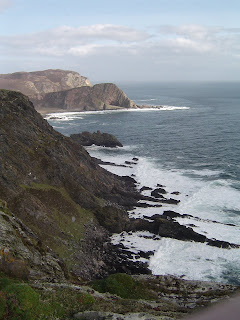 Islay (pronounced ‘eye-lah’) is an island located off the southern Scottish coast. A land with virtually no trees and plenty of peat. Peat, you will remember, is layers upon layers of decaying plants (grass, underbrush, bushes, etc.) in waterlogged areas like bogs and moors. How peat becomes an integral flavor component of single malt scotch is due to an early step in the distillation process.

After the barley is gathered and submerged in local water for a couple of days (in order to cause germination), it will be spread on the floor of a ‘kiln.’  A fire is started underneath the floor and the fuel for the fire is peat. The smoke travels up through the ventilated floor and adheres to the barley imparting the smoky, tar, medicinal and sea weed flavors we associate principally with Islay and the word ‘peat.’

As soon as you pour an Islay malt the smoke, tar and peat aromas escape the glass and in many cases can fill a room. This is a good thing if you like scotch. Not so great if you do not, which was the case a couple of weeks ago when I visited my friend, George, at his office on a late Friday afternoon. We were having a dram of Bowmore around 4:30pm (I would never leave work!) when the office manager passed in the hallway remarking that she could smell the whisky from outside the boardroom. She was not impressed and promptly left. Her loss . . .

A Stash of Scotch
George is a lawyer (don't hold that against him) and every once in awhile a client is happy with what he has done, and so a gift in the form of a bottle would appear at reception. Over the years, quite a few bottles have accumulated at his office. Strange thing is that he has never gotten around to taking them home or having a drink at the end of a long day. Anytime there was a drink it would be in a bar.

Well, that all changed this winter when I dropped by the office unannounced and discovered how charitable his clients had been. There were bottles in the bookcase, a couple in the kitchen sitting in the cupboards and a few in his desk. They were all covered in dust and unopened! Royal Salute, Glenlivet 12 yrs, Highland Park 12, Glenlivet 18, Johnnie Walker Blue and others. They were obviously old because in many cases the labels were clearly from the 1980’s. George was the only scotch drinker in the office. The other two employees were ladies who had no interest. When I would show up we typically headed to a local bar or pub. Well, a couple of weeks ago that all changed when I suggested we open some of these antique bottles (not really antique but certainly not new). He agreed. The one we tried was a Bowmore 10 year old (700ml) that had been a special bottling for the Opimian Society. By the way, the Opimian Society is a cooperative that buys wine for its members. George was a member at one time. So was I until kids came and I found the wine collecting/drinking habit too expensive.

Anyway, George took a photo of the bottle but has been remiss in emailing it to me so I do not have it in this posting. Will have to badger him on that little task. In any event, the label reads: “Private Selection The Opimian Society Bowmore 10 yrs old 1990 distillation.” (Since the original posting, he has provided the pic.  It's below.)  If it was distilled in 1990 and has an age of 10yrs, then it was bottled in 2000. This corresponds with George’s weak memory. I was quite interested to taste a bottle that sat on a bookcase for ten odd years.  Here’s the tasting note: 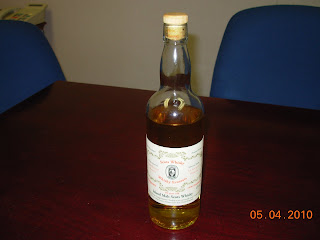 Finish
Salt, brine, dries on palate as a plume of pipe smoke takes over.

General Impressions
I was impressed. I am not a huge Islay scotch fan but do enjoy this one. George was not so impressed. He described it as the diet cola of Islay scotch or something to that affect.  He said he could not understand how a peaty scotch could be so light bodied.

Also present for the tasting was Mike, he turned up that Friday afternoon in the course of various building maintenance duties. I hollered down the hall for him to join us and he did. Mike was not a fan. He did not like it at all. But, it should be noted that he is not a novice scotch fan, but rather a scotch virgin and needs to suckle at the breast of blended Speyside scotch whisky before venturing into Islay territory. Mike did have some Highland Park 12 year old on another Friday after work and he was very impressed. We will have to mentor Mike to see the fine attributes of Islay scotch. As for George, a veteran of many empty scotch bottles, well I guess there is no explaining bad taste . . .

Having tried an old bottling of Bowmore, it made me want to explore Bowmore some more. My friend James had mentioned that he had tried the 12 year old bottling and enjoyed it, and so I decided to try it as a comparison. 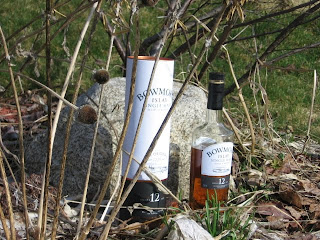 Nose (undiluted)
Delicate smoke, sulphur, and medium peat. This single malt scotch has probably the gentlest of Islay malt aromas. The scent of sulphur is a little off-putting, but don’t worry, it never rears its head in the palate.

Finish (undiluted)
Quite long. Drying sea salt, black tea and a little mint, all in a cloud of mild Canadian cigarette smoke. The final taste is ashes. The tail end of a big cigar.

General Impressions
A nice change from Lagavulin 16 years. Sometimes I am not in the mood for Lagavulin 16 years. As great a single malt as it is, it is rather ‘over the top’ and so, does not lend itself to being casually enjoyed while say chatting with friends or watching The Masters. Lagavulin 16yrs commands or rather demands your attention. Naturally, it is not suitable for every occasion.

When you want to just unwind with friends and make small talk, watch the game or just unwind in front of the TV, Bowmore 12 years fits the bill to a “T.”

Ardbeg 10 years Comparison
Ardbeg 10 years is a competitor to Bowmore 12 years. The Ardbeg is coarser. The peat, salt and smoke flavors are more robust and lacking the sophistication of the Bowmore. Certainly, Ardbeg 10 years has its fans, who probably number more than the Bowmore, but I cannot be counted among them. I definitely prefer the Bowmore for its’ restraint. Finally, Ardbeg 10 is more expensive by a considerable margin, which again makes Bowmore 12 more attractive from an economic point of view.

Price Point
In terms of price point, it’s very reasonable. Actually, it is one of the lowest priced 12 year old single malts. By factoring in the price and considering the flavor profile, you soon realize there is value for money here.

Is this for you?
Probably. It’s fairly difficult not to like this single malt. Even if you are a novice scotch fan lacking a deep affection for Islay malts with their classic peat and smoke flavors, this malt probably will reel you in. The main reason for it’s appeal is that none of the Islay flavors are too robust. Everything is gentle, balanced and therefore not likely to offend. Accordingly, it is a great ‘starter’ Islay single malt for those who are unfamiliar with Islay or in the past had decided it was not for them. If you have held such thoughts, Bowmore 12 years may change your mind.

One caveat though.  This is a type of scotch that I cannot sit down several nights in a row and drink.  It's just a bit much in the peat/smoke department.  So, I am happy to have it in the cabinet as a nice change but it is not a regular 'go-to' scotch or whisky like Johnnie Walker Black, Highland Park 12, Jim Beam Black and a few others that I simply never seem to tire of.  An exception to my comment would be if you are a peat and smoke fan of Islay single malts.  I am, at heart, a hardcore Speyside/Highland nut.  Maybe an Islay fan would insist that this could be a daily drinker.  Just not for this guy.